Change of Baton As Echono Takes Over At TETFund 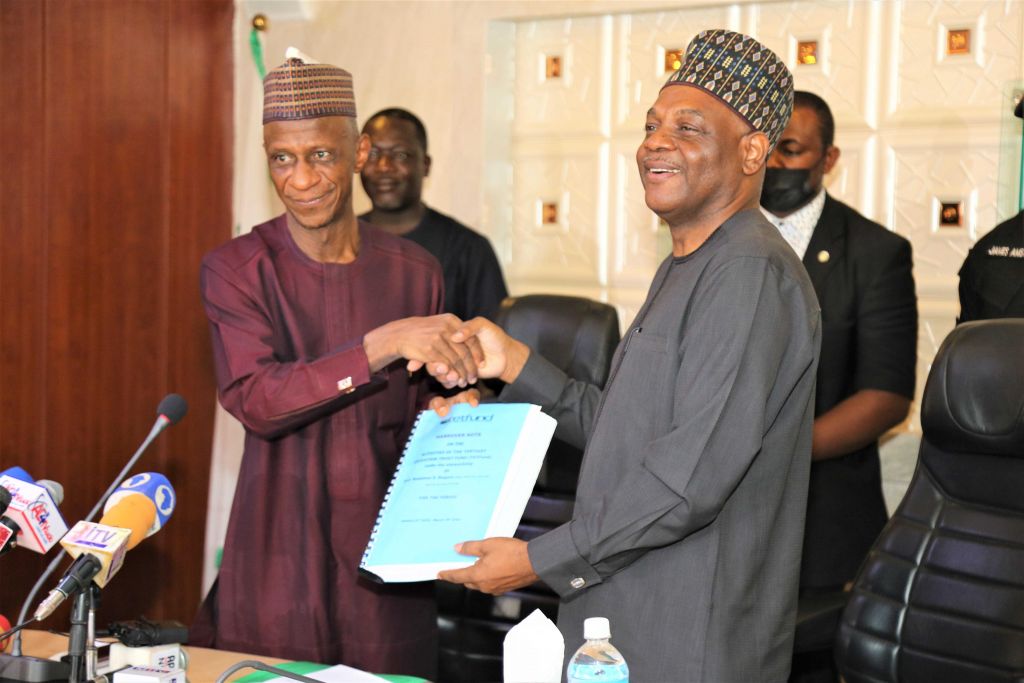 The new Executive Secretary of Tertiary Education Trust Fund (TETFund), Arc. Sunny Echono has taken over the mantle of leadership amidst rousing welcome from staff and Management of the Fund as well as stakeholders from the Ministry of Education.

Arc. Echono’s appointment was announced following the successful expiration of tenure of his predecessor, Professor Suleiman Elias Bogoro whose five-year tenure came to an end on 18th March, 2022.

Speaking at the well-attended handover ceremony held at the Fund’s Boardroom, the Executive Secretary commended his predecessor for the huge service rendered to Nigeria through the arrays of impactful projects and interventions carried out in the tertiary education sector under his stewardship.

Echono expressed profound gratitude at his selection out of numerous equally qualified candidates by the Minister of Education, following an endorsement by President, Muhammadu Buhari, declaring that he would never take this appointment for granted but rather as an opportunity to serve the nation in another capacity.

He promised to build on the achievements of Professor Bogoro and strengthen areas that might need improvement.

Speaking earlier while presenting the handover notes to Arc. Echono, the outgone Executive Secretary, Professor Bogoro expressed joy that he is handing over the baton to a very experienced successor, which he said gives him confidence that the Fund is in good hands.

Taking pride in handing over to such a worthy candidate, Bogoro implored Staff and Management of TETFund to give Arc. Echono their full undivided support, thanking them for their support during his time.

Reeling out his achievements while at the Fund, he added that the Fund has been described as one of the most impactful agencies in recent times owing to a long list of achievements in the areas of Research and Development, increased universities rankings, increased international visibility of tertiary educational institutions; and recognition/selection by the International Science Granting Council among others.

He said, “as I handover, I can reflect over the remarkable achievement of the Fund. In the area of ranking, Nigerian universities have improved, and we must give credit to TETFund”.

He, therefore, enjoined the new Executive Secretary to keep steering the ship and run with the vision, which would ultimately ensure the fulfillment of the TETFund mandate while engendering overall national development that Nigeria is yearning for, through the ivory towers’ innovativeness.

The handover ceremony was a moment of excitement as exhibited by both, showing a smooth transition, which was described as unprecedented in the history of the agency.

In his maiden press conference shortly after the handover ceremony, Arc. Echono indicated his readiness to hit the ground running, as he pledged to raise the bar, following in the stead of Bogoro.

His administration, he pointed out, would focus on curriculum delivery system in schools, an initiative aimed at making the Nigerian graduates more relevant not just in employability but as innovators and wealth creators.

According to Arc. Echono, deploying the tools of Information and Communication Technology (ICT), to improve curriculum development with renewed focus on human component on infrastructure is vital for achieving the ideals of knowledge economy.

The new Executive Secretary went on to outline what changes need to be effected in order to take TETFund to a new era of excellence; noting that to transform education in the country, there is a need to focus on the quality of graduates being churned out by tertiary educational institutions.

“This is because the Nigerian curriculum system is theory driven and does not meet the requirements of the industry. As such graduates who join the workforce usually require further training and retraining to fit into job roles”.

He therefore pledged to forge a partnership between the Academia and Industry to ascertain what actions need to be taken to remedy the situation and permanently solve the skill gap situation.

Arc. Echono went on to state that his tenure would focus on funding entrepreneurial studies and research studies in digital technologies to prepare students for global competitiveness with the end goal of building a knowledge economy and increasing the country’s global presence.

“We have done so well in physical infrastructure, and we will continue to do so but we also must focus on those we entrusted with the evaluation of our students. We must focus on the type of curriculum that is being taught and the delivery systems,’’ he added.

He went on to say that improving our University ranking is dependent on two major factors which are: the quality of faculties and exchange programs, explaining that these factors couldn’t be improved upon with the current instability in the educational system caused by the incessant strikes by ASUU.

“Therefore, if the government can come to an agreement with ASUU, it will go a long way to improving the ranking of our universities and bring the much sort after change we all seek in our educational system”, he stated.

Congratulations Sir! I am wishing you a successful tenure.

I wish to congratulate the new Executive Secretary of TETFUND, Arc. Sunny Echono on his resumption in office. Sir, as you recorded successes as Permanent Secretary, Federal Ministry of Education, I know you will do more in TETFUND. More grace sir